AUSTIN, Texas — Despite the COVID-19 pandemic, workers in the agriculture industry are tasked with keeping food on the table, meaning livestock auctions are continuing as usual. While more animals are being sold, what happens further down the supply chain is becoming an issue.

“A lot of your feed yards are getting bogged down cause the packing houses are cutting down on their killing,” Donne Richter with Seguin Cattle Co. said. “And so the fat cattle are getting backlogged, and you don’t have many places to go with these cattle right now. And it just creates a problem.”​

President Donald Trump is signing an executive order aimed at preventing shortages of meat because of recent coronavirus outbreaks at meatpacking plants, using the Defense Production Act to classify them as critical infrastructure. This would mandate the plants to stay open.

For weeks, ranchers have held off on selling their livestock due to uncertainty in the market, but now those in the industry say their auctions are steadying.

“Three weeks ago, it was like a ghost town in there. There weren’t 10 people. We ran a hundred something cows and a hundred something sheep and goats,” said Seguin Cattle Co. Manager Bryan Luensmann. “Everybody’s just kind of vigilant, paying attention to what the market is. Whether it’s a good week to sell them, a bad week to sell them, a bad day, a good day. I mean it’s just been a roller coaster ride here last month.”

Luensmann said people travel from hundreds of miles away to buy and sell at his auction. COVID-19 has led to uncertainty for producers waiting to find a good time to sell their cattle, sheep and goats.​

“You spend all year growing your product, I mean the last thing you want to do is give it away because you had a bad day. You can’t hold on to them. At some point, you’re going to have to let them go. But that’s the difference in them weighing 400, 500, 600, 700 pounds,” Luensmann said. “Everybody’s on their own as making their own decision at this point. I mean, there is no crystal ball where we could help the producer on a good week or bad week. Everything’s just running downhill now. It’s affecting everybody.”

The good news is Luensmann said the past couple of weeks have been more “normal” in terms of how many animals are sold.

“People are feeling better about what they’re doing, they’re starting to move around and get out there so I mean it’s just a better situation,” Luensmann said.

After being raised by ranchers and then sold at auction, animals get sent to the slaughterhouse or are “put on feed” to get to an ideal weight. COVID-19 has spread at meatpacking plants across the nation, including in Texas, which means less meat is able to be processed due to the plants shuttering. 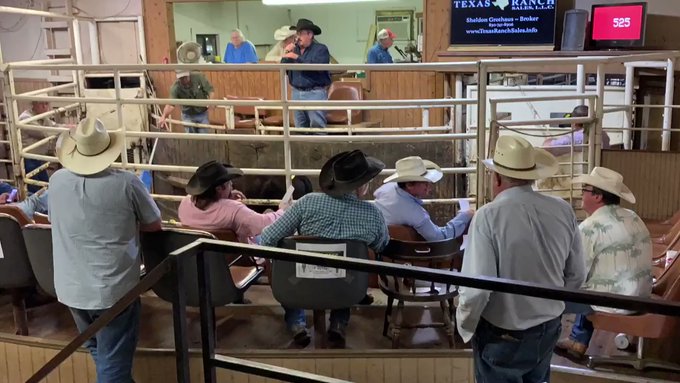 While livestock auctions are going smoothly, Seguin Cattle Co. says cause meatpacking plants have slowed production due to COVID-19, they’re worried about a backlog of animals awaiting processing. They tell me we shouldn’t “freak out,” as they don’t expect meat will run out.

“If we were to potentially see a shortage, it’s not like we’re gonna run out of meat. It just may be we have some distribution issues from a logistical standpoint and maybe not be able to get as much beef or as much meat at a certain location or certain region in the state as we would at a certain period of time. But we have plenty of meat in the supply chain,” Banta said.

Banta believes there’s enough flexibility in where the meat is processed to ensure there’s still enough to go around.

“If we do have a shutdown in one facility, we can take some of that production and potentially shift it to another location. So we may have to freight those animals, a little further or haul that meat a little further after it’s been processed but to some extent, we have some flexibility to shift from facility to facility,” Banta said.

United Food and Commercial Workers International Union​ announced Tuesday that new estimates show 22 meatpacking plants have closed, resulting in a 25 percent reduction in pork slaughter capacity as well as a 10 percent reduction in beef slaughter capacity. While this means some of your favorite cuts of meat may become hard to come by for a while, Seguin Cattle Company has a message for consumers.

Seguin Cattle Company recommends producers keep up with the market trends, and for consumers, we can help by continuing to purchase meat to help keep up the supply chain.

“This is an expression I use, we’re gonna have to eat our way out of this. Literally what we’re going to have to do,” Luensmann said.

Trump’s executive order announcement to mandate meat processing plants stay open comes a day after Tyson ran a full-page newspaper advertisements addressing concerns over possible meat shortages. The ad read “As pork, beef and chicken plants are being forced to close, even for short periods of time, millions of pounds of meat will disappear from the supply chain… The food supply is breaking.”

Trump on Tuesday told reporters that “there’s plenty of supply,” but that supply chains had hit what he called a “road block.” It’s sort of a legal roadblock more than anything else,” he said. He also told reporters the executive order will also include liability protections for meat processing companies.

According to the United Food and Commercial Workers International Union, “at least 20 meatpacking workers have tragically died from coronavirus while more than 5,000 workers have been hospitalized or are showing symptoms.”

“To protect America’s food supply, America’s meatpacking workers must be protected. The reality is that these workers are putting their lives on the line every day to keep our country fed during this deadly outbreak, and at least 20 meatpacking workers have tragically died from coronavirus while more than 5,000 workers have been hospitalized or are showing symptoms. For the sake of all our families, we must prioritize the safety and security of these workers.

“While we share the concern over the food supply, today’s executive order to force meatpacking plants to stay open must put the safety of our country’s meatpacking workers first. Simply put, we cannot have a secure food supply without the safety of these workers. We urge the Administration to immediately enact clear and enforceable safety standards that compel all meatpacking companies to provide the highest level of protective equipment through access to the federal stockpile of PPE, ensure daily testing is available for workers and their communities, enforce physical distancing at all plants, and provide full paid sick leave for any workers who are infected. Additionally, to protect the food supply and ensure these safety standards for workers are enforced, these plants must be constantly monitored by federal inspectors and workers must have access to representation to ensure their rights are not violated.

“All of our country’s elected leaders – federal and state – must work together to ensure that we keep these essential workers safe and our country’s food supply secure.”